In 1971, Satchel Paige became the first player inducted to the Hall of Fame due to his career in the Negro Leagues. He was followed by the Thunder Twins (Buck Leonard and Josh Gibson) the following year. The Committee on Negro Baseball Leagues (1971-1977) made a total of nine selections:

At that point, they decided their work was done. From the origins of Black Baseball until integration, only nine candidates were selected. From that point on, any further elections would be handled by the Veterans Committee.

The Veterans Committee (who controlled Negro League elections from 1978 to 1994) did not prioritize Negro League candidates whatsoever. Just two more were added during this time:

Because of the lack of selections, a new quota system was put into place so that more Negro League candidates could be enshrined. Under this system, several more excellent selections were made.

Then in 2001 Major League Baseball awarded a $250,000 grant so that researchers could uncover as much data as possible. After this multi-year project, the Hall of Fame would then hold one large election and then close the book on the Negro Leagues. In 2005, the study was complete. The Special Committee on the Negro Leagues then voted on the candidates for 2006 induction. There were 94 candidates on the preliminary ballot and 39 names on the final ballot. 17 were inducted, bringing us to a total of 35 Negro League inductees.

The book was indeed closed until the Early Baseball Era Committee met in December of 2021. At that point, Negro League candidates were eligible for the first time in 15 years. That yielded two more inductees.

It is worth noting there are several other Hall of Famers who played in the Negro Leagues (Jackie Robinson, Willie Mays, etc.), but for this list we’re counting players were were inducted primarily for their contributions in the Negro Leagues. While I was strongly in favor of the inductions of O’Neil and Fowler, it was disappointing that after 15 years of improved data collection, no more candidates were inducted for their playing careers. There were several great candidates on the ballot, like Dick Redding, George Scales, and Grant “Home Run” Johnson. But they fell short.

That brings us to today’s question: How many more inductees from the Negro Leagues should the Hall of Fame add?

The 42 for 21 project (which I was honored to vote in) suggests that many more candidates from the Negro Leagues should be inducted.

Another startling statistic illustrates the point: even if 42 more deserving candidates were to be inducted, it would bring the percentage of Negro Leagues & Black Baseball from the Segregated Era only to about 34% (depending on the mix of players and non-players). That would still be far below the corresponding level of the Integrated Era.

So… is this too many? What’s another way we can figure out how many Negro League candidates it would be fair to add. Here’s an approach I took recently:

Here’s one way to measure how many more Negro League players we should be adding to the Hall of Fame:

That’s a pretty big discrepancy. Making these percentages equal doesn’t seem too controversial—if a certain percentage of players from the White leagues got in, a similar percentage from the Black leagues should. Right? That only seems fair when you consider who the dominant players were after integration.

The Negro major leagues were in operation from 1920-1948 (29 years). How much top talent was kept out of the AL & NL during that time? The NEXT 29 years (1949-1977), these were the top 40 players by position player WAR. Players in orange would not have been allowed in the majors. pic.twitter.com/uko6ZBjE5J 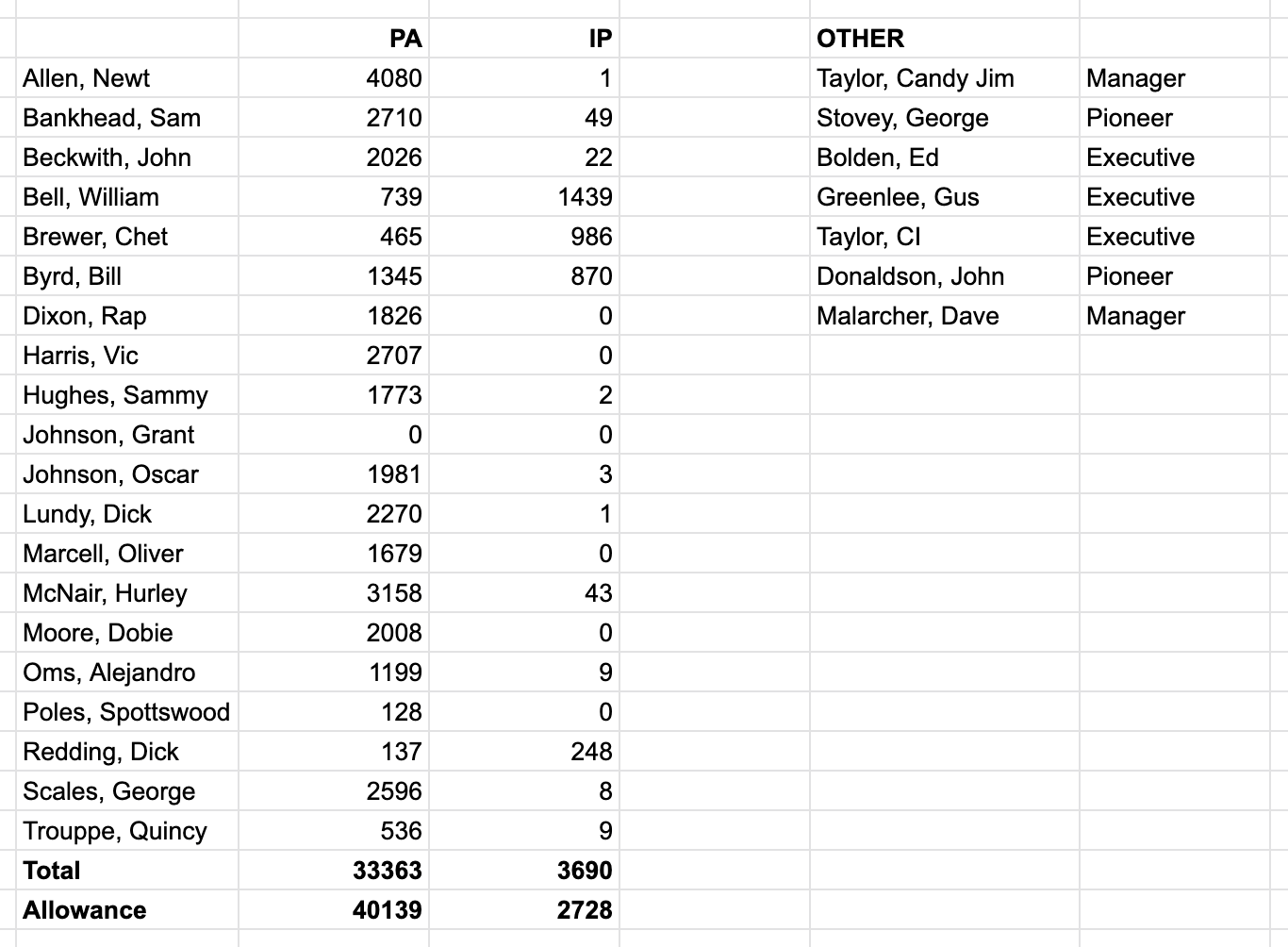 First of all, seven of my selections would not count toward my “allowance” because they would be selected under categories other than Player. The percentages I used in the tweet only included those selected as Players. The remaining 20 candidates ended up using up my innings pitched allowance, but not quite using up my plate appearance allowance.

The innings pitched surprised me. But I think it might have something to do with the top pitchers in the Negro Leagues pitching in more league games (in other words, the games against top competition). The barnstorming games may not have featured as many innings by top pitchers. That’s just a theory, however.

The giant elephant in the room is that the 1920-48 era is the most overpopulated in the Hall of Fame for the White major leagues. I have a very hard time using that as an excuse to not induct players from the Black leagues. How is that their fault?

I’m not positive I’d put all 27 candidates in the Hall of Fame, but I’m also not sure I’ve collected all the candidates that are worthy. So many great Black and Afro-Latino players had careers that mostly occurred outside of the United States. It’s hard to tell if they would even be eligible for the Hall of Fame. There are also several who lost several years when they were stashed in the Minor Leagues during the slow integration of the major leagues. That said, this feels like a great place to start. What do you think?